I can’t believe we are 1 week away from our 5 year anniversary since moving to Texas. It’s crazy how fast time has flown by.  I feel like it was just yesterday that we were in Michigan considering making the move. Many of you have asked me to share our moving story, and I thought since we are close to our moving anniversary it would be a great time to share it. Keep scrolling to read as well as the tips for moving that I share!

We lived in Michigan our entire life.  I am from the west side of the state, Kentwood which is a suburbs of Grand Rapids.  Rick is from the city of Detroit.  That he will emphasize a million times that he is from Detroit not a suburb surrounding it. haha.

Rick and I moved to Novi (suburb of Detroit) after getting married.  While we liked the area we just were pretty stagnate in our careers.  I was in my early years of HR and Rick had just made a career change after being in the mortgage industry for many years. We were living pay check to pay check, and struggling to make ends meet. Renting out a home that we didn’t love, and owning home seemed like a goal so hard to obtain.

We visited Dallas frequently, because my sister and mom both moved there.  Every time we would visit we loved it.  It seemed so progressive, and so much opportunity for growth.

In March 2014, we delivered Calvin. At that point we had planned on staying in Michigan.  However, in the back of my head I knew our family needed a change. End of May 2014 I started thinking about our lease ending soon. I had no desire to sign another lease, and signing up to keep doing more of the same. I came to Rick with the idea of dropping everything and just making the move to Texas.  My husband does not like change, so I was expecting a no.  Surprisingly, I didn’t completely get shut down.

Naturally, he was concerned about jobs in Texas.  Rightfully so! But we didn’t want not finding a job to stop us from moving, so we both looked into transferring our positions. Both of our jobs were also in Dallas. This wouldn’t be long term, but it would at least get us down there without the stress of needing a job.  We decided if our jobs were ok with it then we would move forward.  We were so fearful to even ask.  In my position I didn’t know anyone that transferred.  On the same day we both got our transfer requests approved! And just like that our move to Texas became a reality!

Y’all I am writing this as if I wasn’t fearful, but I WAS SO SCARED! I had a newborn baby, son entering 1st grade, not a ton of money in the bank.  This was a faith move.  We felt God called us to move, and we were trusting Him to make this happen.

We put in our notice with our landlord, and it became official. We quickly started selling almost ALL our furniture, so we could move light.  Money was tight so we decided to just put our furniture in storage and come back for it at a later time.  This allowed us to go down with a trailer (more affordable), rather having to get a full truck. For the first 3 months we were going to be living with my sister so we could get used to Texas, and look for an apartment. So not bringing our furniture worked for our situation.

After getting out of our rental home, we then stayed with my older sister until Rick could transfer down which was about a month.  At that point myself, my Dad, Cam, and Rick made the trip down to Texas.  Calvin being a newborn flew down to Texas with my mom as she happened to be in Michigan at that time.

It wasn’t an easy move.  Having to pump every 3 hours on a 18 hour trip, store your milk, and rotate driving was not fun.  We drove my SUV which was pulling the trailer, and Rick was driving his Mustang (his car at the time). In Oklahoma my car broke down.  Then my dad, who is basically Tim the tool man Taylor, thought he was fixing it and then put too much oil, and only made it worse.

At that point we didn’t have the funds to put it in the shop, and freaking out the car wouldn’t make it.  I just cried and prayed that we could get this car to Texas.  Next thing you know we tried the car again and it was driving like nothing had ever happened, and we finished the remainder of the journey.

Upon arrival we stayed at my sister’s temporarily. Immediately we just felt like things were looking up for our family for taking this decision.  Two weeks after moving to Texas, Rick received a job offer that was a promotion with another company. I took a year to level up.

A few months after moving to Texas, we found a 2 bedroom apartment.  We wanted something affordable that would allow us to repair our finances and save for buying a home.  For 2 years we worked hard to improve our finances. I continued to level up in my career, as did Rick.  I followed my passion and started my blog, and continued to build it.

Here we are today, 5 years later living in our own home that we worked hard to obtain.  We have now listed it for sale, and in the process of building our dream home. I am running a 6 figure business and making over 6 figures income at my corporate job.  We love our church home, and have grown to have an amazing village.  Let’s talk about the kiddos.  Our boys are thriving.

Cameron is in one of the best school districts in the state of Texas testing in the top 8% in the state.  He is part of amazing sports teams.  And what I love most about both our boys is they don’t just know who God is they love Him. Calvin and Cyrus won’t ever remember Michigan, so to them Texas is home.  However, they are both living their best life. Sometimes we ask Cam would he ever want to move back, he almost cuts us off and say NO! HAHA!

What’s crazy to me is what if we let fear stop us from moving? And we would have never been up to move our family out of being stagnate. When God calls you to act don’t question it just do it!

Please note: I am not saying moving solves all problems. Because you can move somewhere and still struggle. Be thoughtful with your decision to move and set yourself up for success.

1.Ensure you Both Want to Move

We wouldn’t be in Texas if we both weren’t 100% on board with it.  Uprooting your life is huge, and the last thing you either of you want is to be unhappy.  Rick and I had more discussions that we can count on this.  Especially since Rick was going to be leaving his family.  Have these discussions without any pressure or swaying.  Allow your partner to make the decision without being in fear you will be upset.  This was a collectively decision we made together.

2. Research WHERE to Move

We felt we would be more successful moving somewhere that we had family.  If you want to move.  I would recommend considering an area first that you may have family and/or friends.  It helps so much with the transition.  If this is not a possibility, no problem.  I recommend visiting the location 1-2 times to get a general idea if you like the prospective location.

I personally wouldn’t move somewhere without a job lined up.  But that is a personal preference.  If you want to move and hadn’t been successful yet getting a job, don’t worry. It was so much easier for us to get a job once we got to the state.  Consider transferring your job if possible. We both did it and it allowed us to make the move and not have a gap of income.

We didn’t have enough savings honestly. We were so ready to move that we just did it.  I would strongly recommend slowing up that urgency and give yourself some time to get some savings.  Coming to a new city/state you never know what will come up.  Case and point we had to put my car in the shop almost immediately upon arrival.  Take a few months to get finances in order. You want to not worry about the deposits on apartments.

5. Assess WHY you are Moving

Sometimes people move for the wrong reasons or because they didn’t really think it through.  Don’t move to runaway from problems.  Because trust, problems exist here in our new state too. How will moving improve your life?  What will you gain from moving?

Moving cross country is NOT cheap.  Before giving a date and putting in your notice.  Total up how much a moving truck will be, security deposit, and gas.  This was expensive.  And why we decided to move only part of our things. We opted to pack light and not bring many items.  We wanted a fresh start in every sense of the word so we didn’t have to worry about a ton of packing.

OPTIONAL as I know this is not a reality for many.  This was a blessing that we were able to stay with my sister as we got acclimated.  If this is a possibility put that pride aside and ask.  This will give you time to learn the area without being stuck in a mortgage or lease.

Give yourself time to get acclimated in this new area.  It won’t be immediate.  Try to get connected with people.  Whether from work, church, or meet up groups.  Learning the area will take you a good 6 months.  So just be patient.  Don’t let this transition period make you think you made the wrong decision. 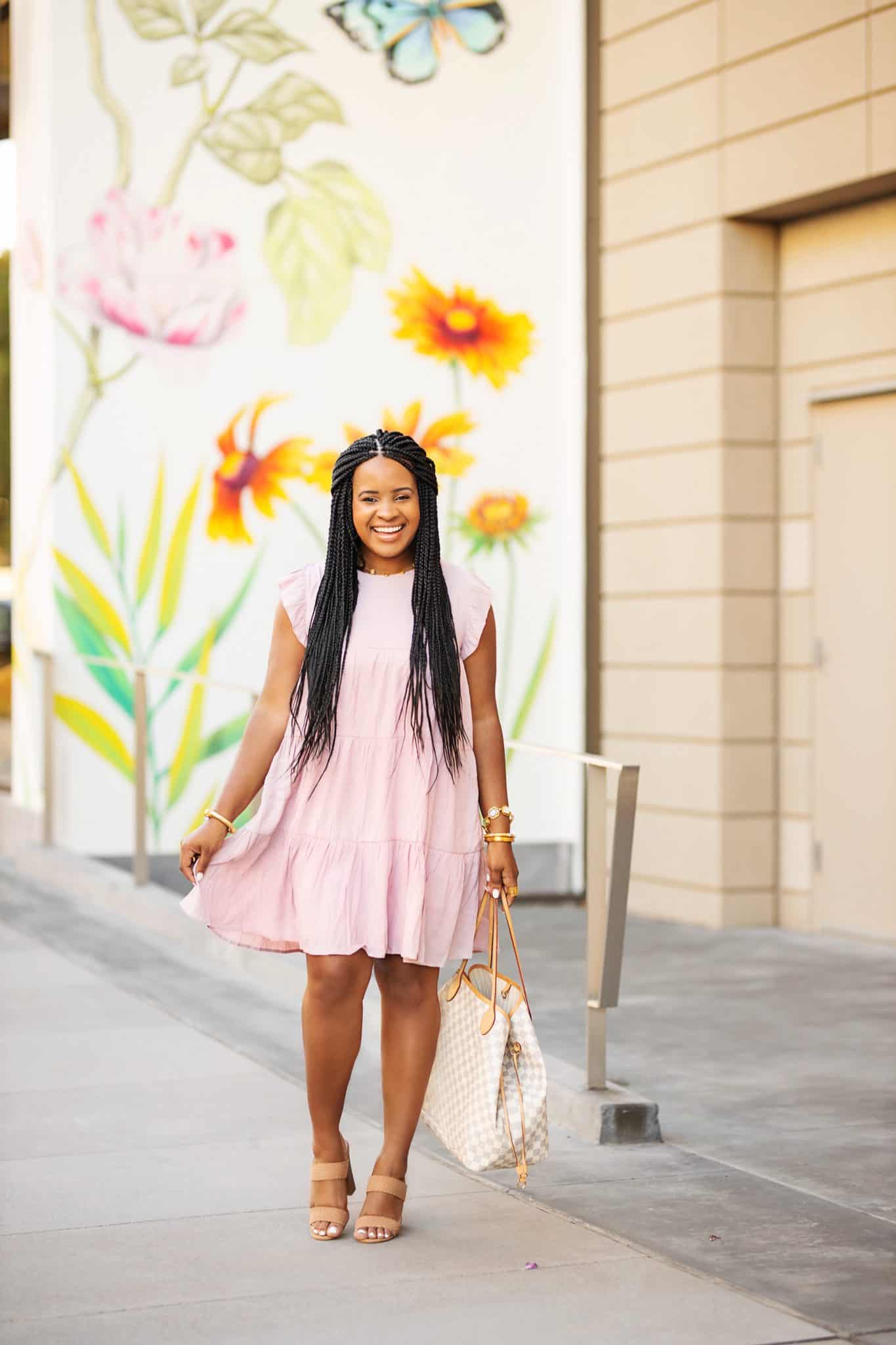 I can’t stress enough about exploring the area you are wanting to move.  Seeing things in pictures is so much different than being there.  Figure out what your commute will be to help you decide the area to live in.  We both had long commutes because we were unaware of how bad the traffic was.  We then got closer jobs.

Do your research and just spend some time in the new city.

Making a big move is scary! However, it was necessary for us. Sometimes we ask each other if we could have been this successful in Michigan.  Honestly, I truly don’t think so.  God put us where we needed to be at the right time and place.  If you are currently considering this, don’t rush the decision.  Take time to think about it.  This has been amazing for us, and hope your move will be just as fruitful for you!