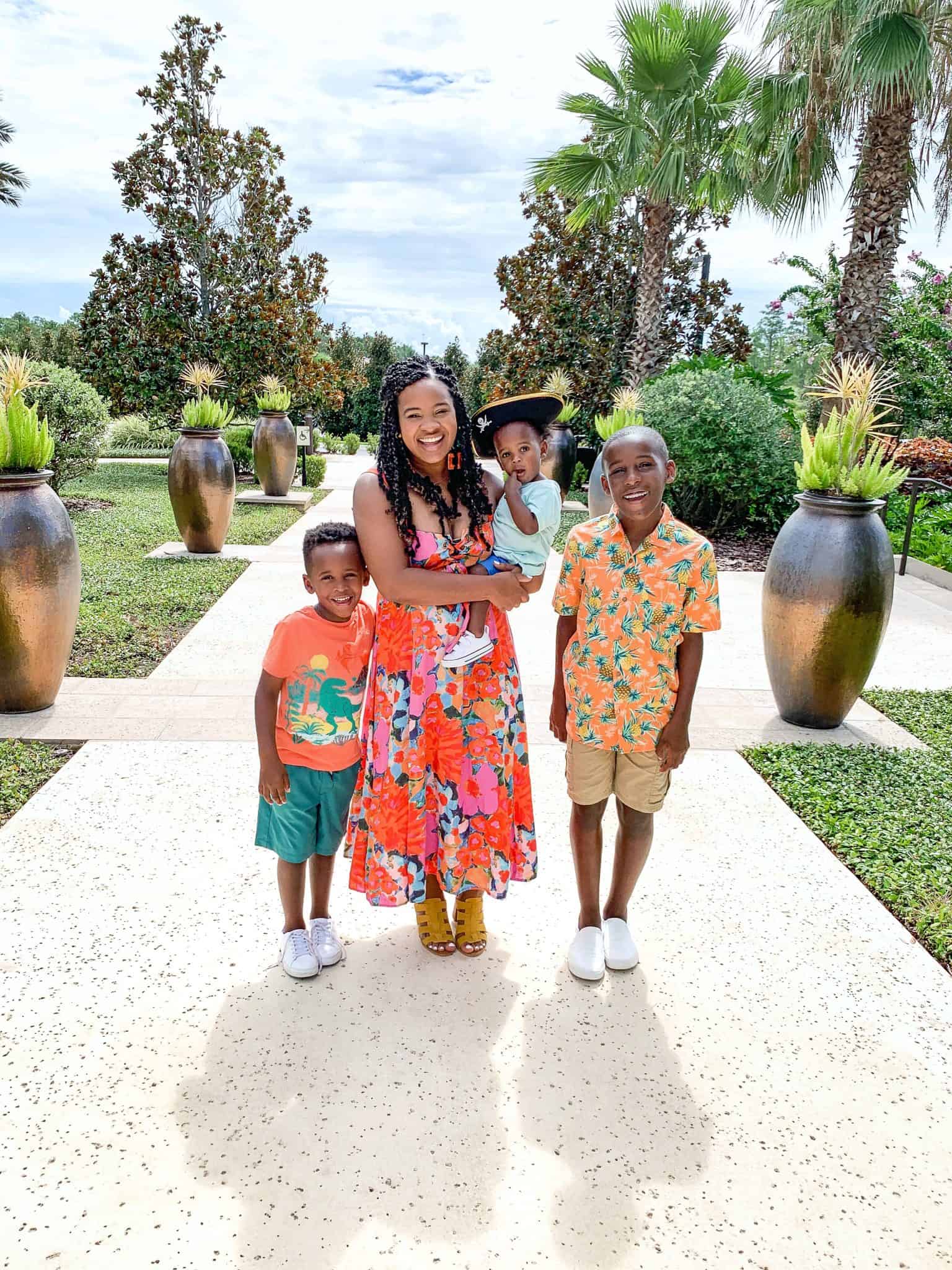 Walt Disney World is the place every family tries to plan to a trip at least one time.  I mean it is the happiest place on Earth! Planning for a Disney trip can honestly turn into a part-time job.  There is so much to plan from the parks to go, to arranging fast passes, and of course planning meals.

We had the opportunity to be hosted by the Four Seasons Orlando resort, and honestly this getaway turned into one of our best family trips to date. 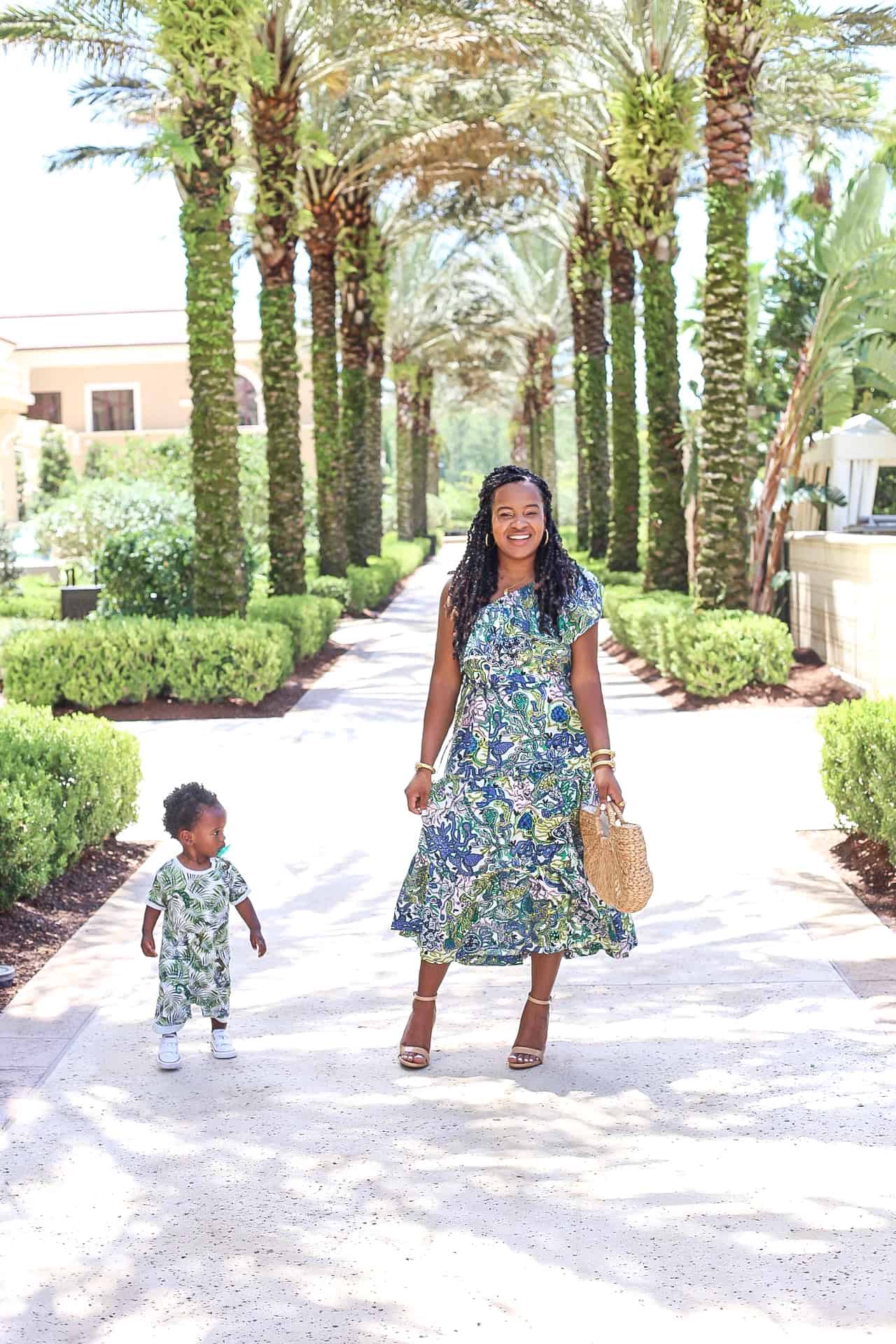 As a parent that loves Disney World, you could be thinking why would you ever want to stay anywhere else beside a Disney resort. I wanted to share reasons why the Four Seasons Orlando resort exceeded expectations. Also, to share why you should consider staying here for your next Orlando vacation.

Of course we had to VLOG the entire vacation!!! You can watch Part 1 of our VLOG from this vacay below or by heading to Newton Family Vlog.  Make sure to subscribe so you don’t miss part 2!! 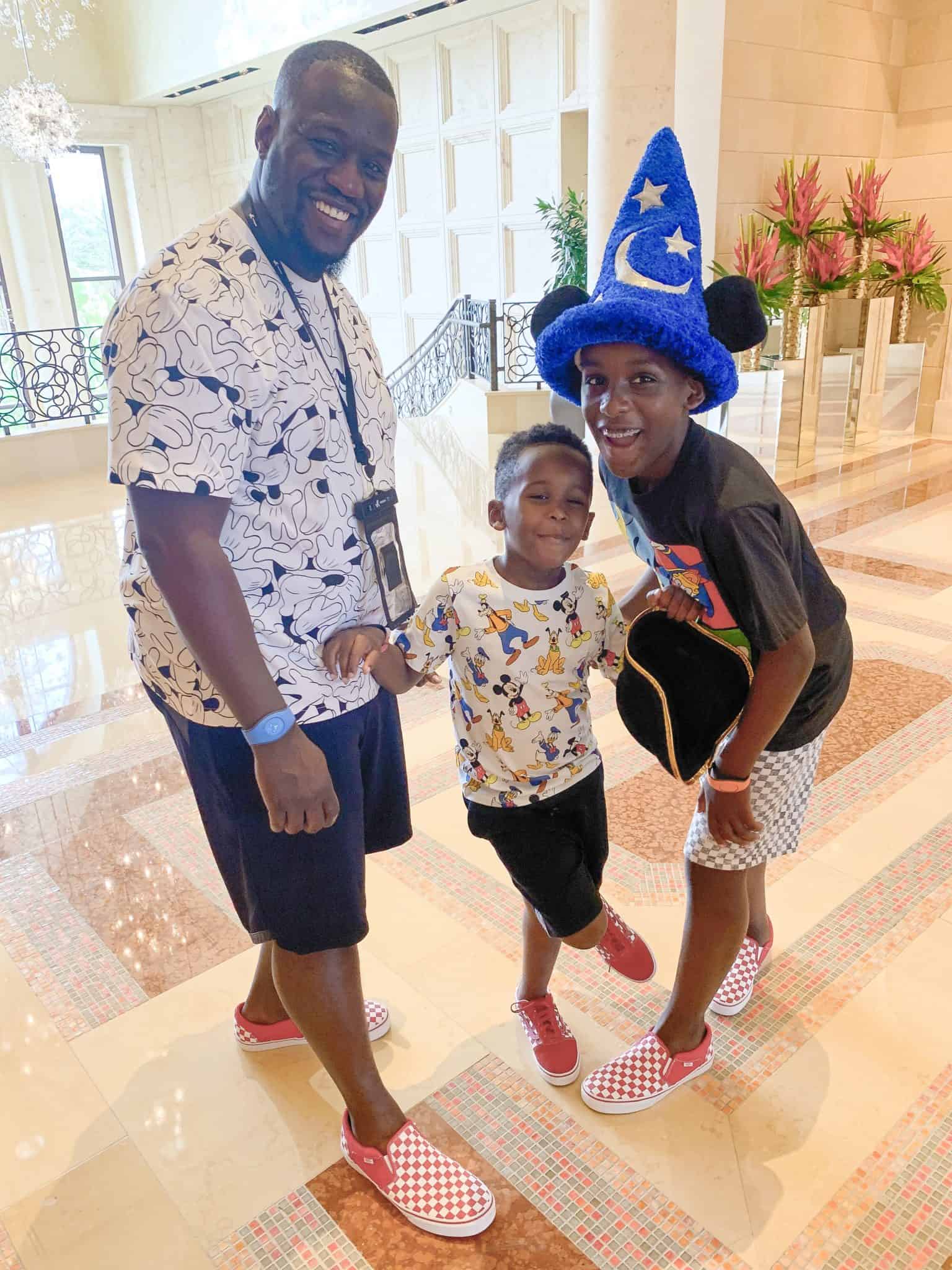 You still get the Disney experience even staying at the Four Seasons Orlando.  They had a designated Disney experience cast member that helped us book tickets and provide additional Disney knowledge when planning out our park experience.

Access to Fast Passes+ is a huge plus.  One of the things that is great about staying at a Disney resort is you have the opportunity to make your ride selections up to 60 days prior.  Along with getting access to Extra Magic hours. Just as if you were staying at a Disney themed resort.

The resort is within the Walt Disney World property.  Never coming to FS Orlando before I didn’t know where the hotel was located. This was great because the boys still get that experience of seeing the Walt Disney World sign when driving in. FS Orlando sits right next to other Disney Resorts. It was only about a 10 minute drive to Magic Kingdom. One thing to call out is FS Orlando does not run on the Magical Express.  However, they did have a shuttle that takes you to the parks. You also have access to use the Lyft Minnie Van. This is something to consider when planning your transportation to/from the airport.

Girl Moms: If you have a daughter they also offer Magical Moments to make your girls feel like a princess!

Even though you are not in a themed Disney hotel you still are providing with Disney experiences. 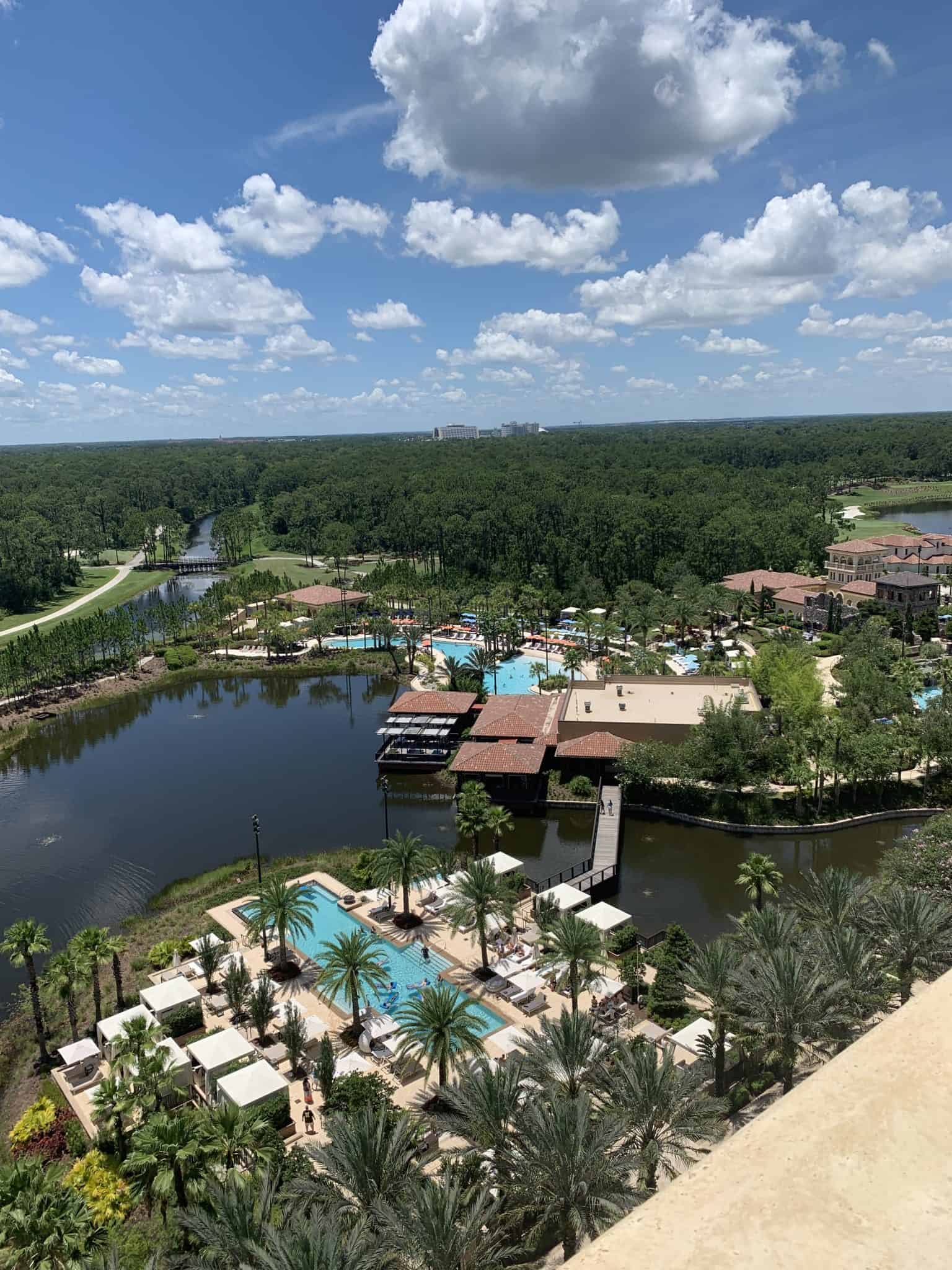 All I can say is wow! This was one of the highlights of our trip.  We stayed in the Park View Suite and it exceeded all expectations. Our room had a separate bedroom, 2 baths, with a living room that included a sofa bed.  So spacious for our family of 5. It gave Cyrus room to run around after he was tired of being cooped up in a stroller at the parks. The master bathroom was phenomenal. Rick’s favorite part, that he is still plotting on how to get this in our new home is the TV that was in the mirror.  I also have to expose Rick because on the first night I woke up to use the restroom and found him asleep in the grand bathtub with the mirror TV playing. HAHA. Safe to say this is husband approved. Our balcony in the Park View suite had a clear view of the Magic Kingdom fireworks each night, and you also could see the beautiful Four Seasons Orlando grounds.

Since we don’t have a small family it is important that we don’t feel on top of each other.  It comfortably accommodated our family of 5, stroller, and ALL our luggage.

Thoughtful detail to note: Whenever the Four Seasons Orlando staff would do their turn down service they would always replenish Cyrus’s baby toiletries along with changing his diaper pail. 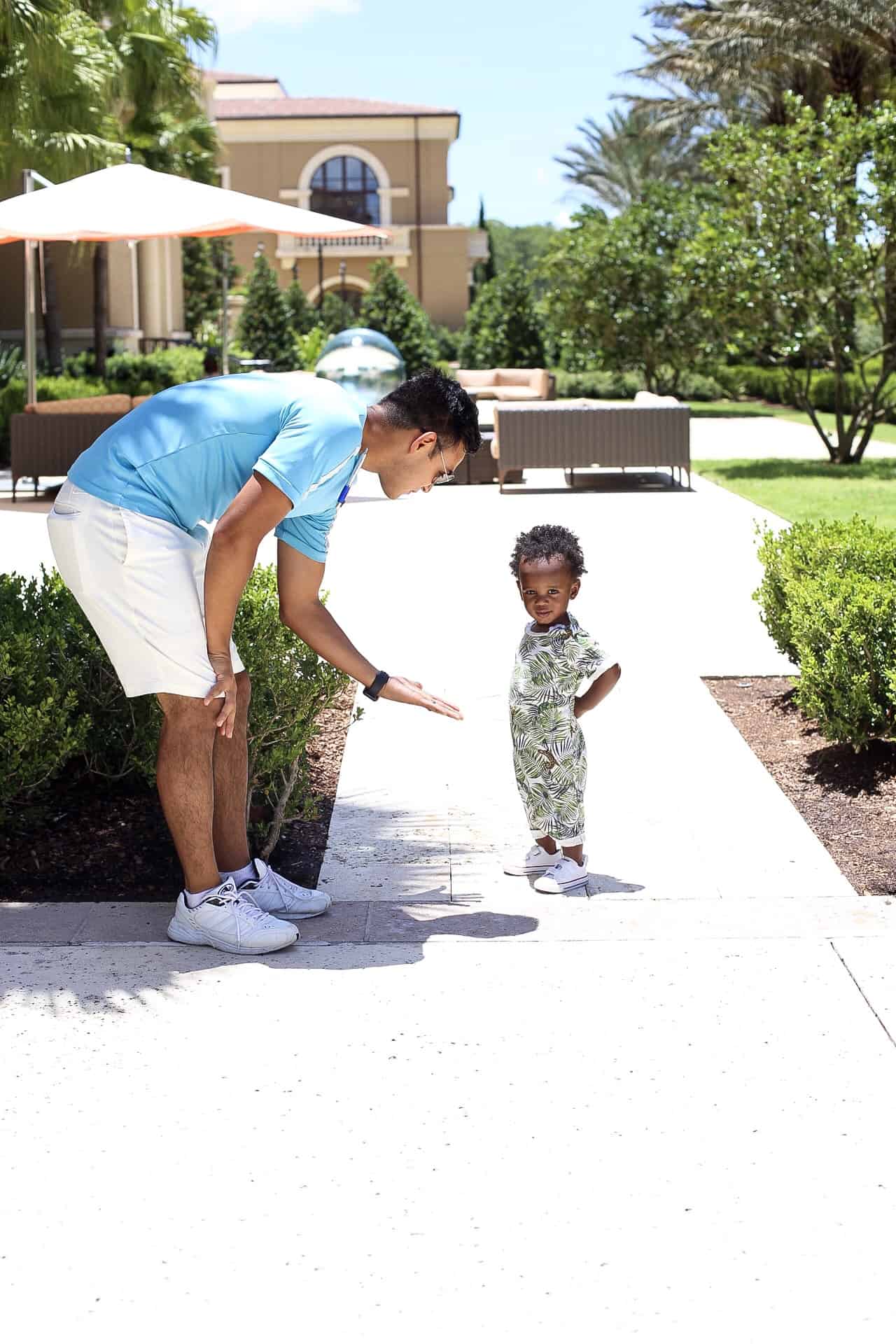 This is now our 2nd Four Seasons resort we have stayed, and I will say it is like no other. The Four Seasons Orlando staff consistently goes above and beyond.  From giving our family a room orientation to the pool attendant getting us set up pool side. We had Four Seasons staff run across the room to get our door for us.  Our boys wanted a sundae, and they created a personal sundae station for the boys. We have said that some of the reason we will continue to be Four Seasons Orlando customers is based on their service.  They make you feel like the everyday person is a celebrity from the moment you step on the property. 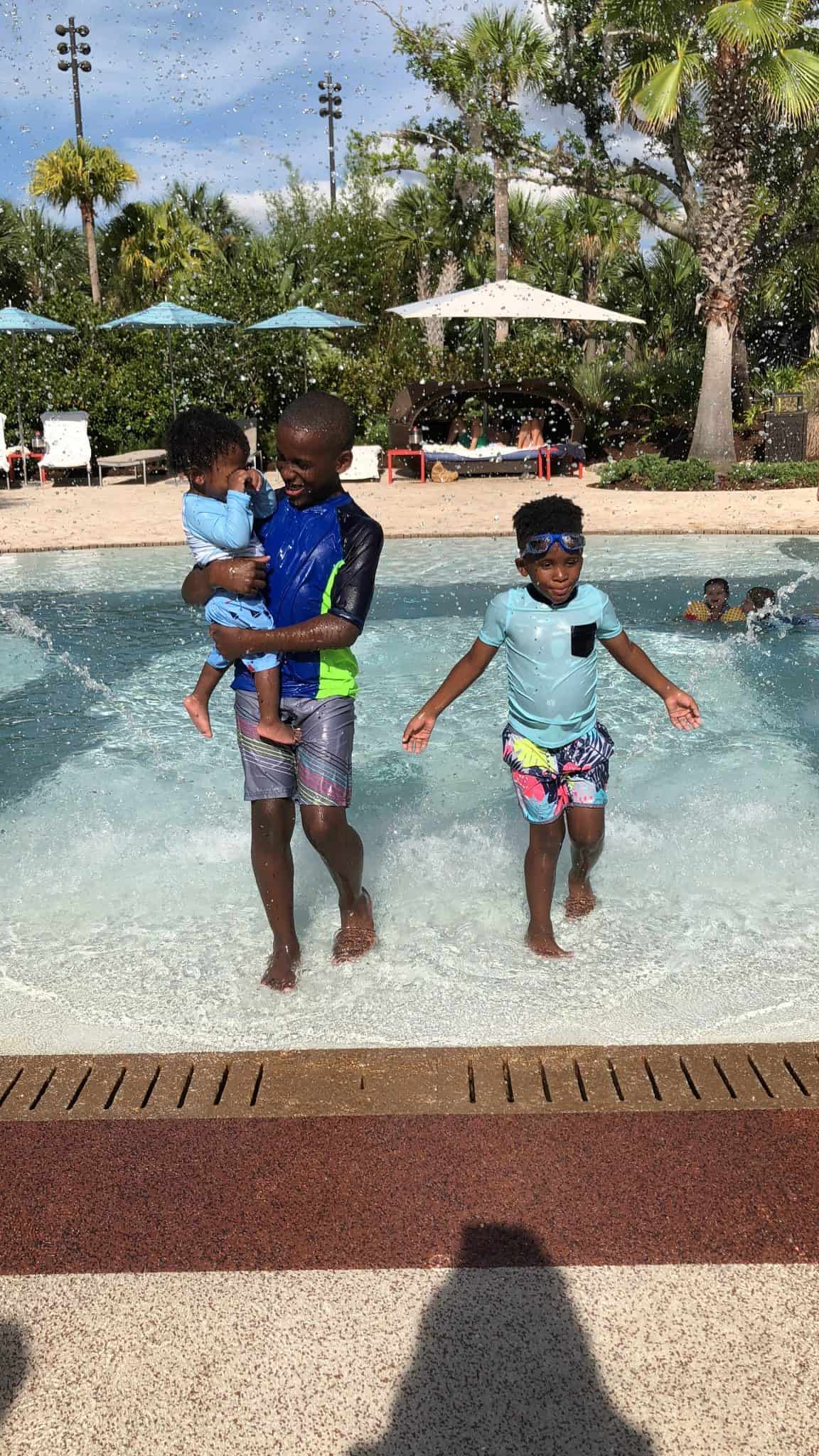 I felt the Four Seasons Orlando pools were their own attraction! There are 5 water areas, and each of them equally amazing.  An adult pool, the family pool, lazy river, water slides, and then the splash pad. With my hair in braids I was taking advantage of all the water activities Four Seasons Orlando had to offer.  We went around the lazy river too many times to count. From the water falls to the palm trees covering the lazy river it was an amazing experience. And yup, we even took Cyrus. Him and I shared floaty and cruised along. 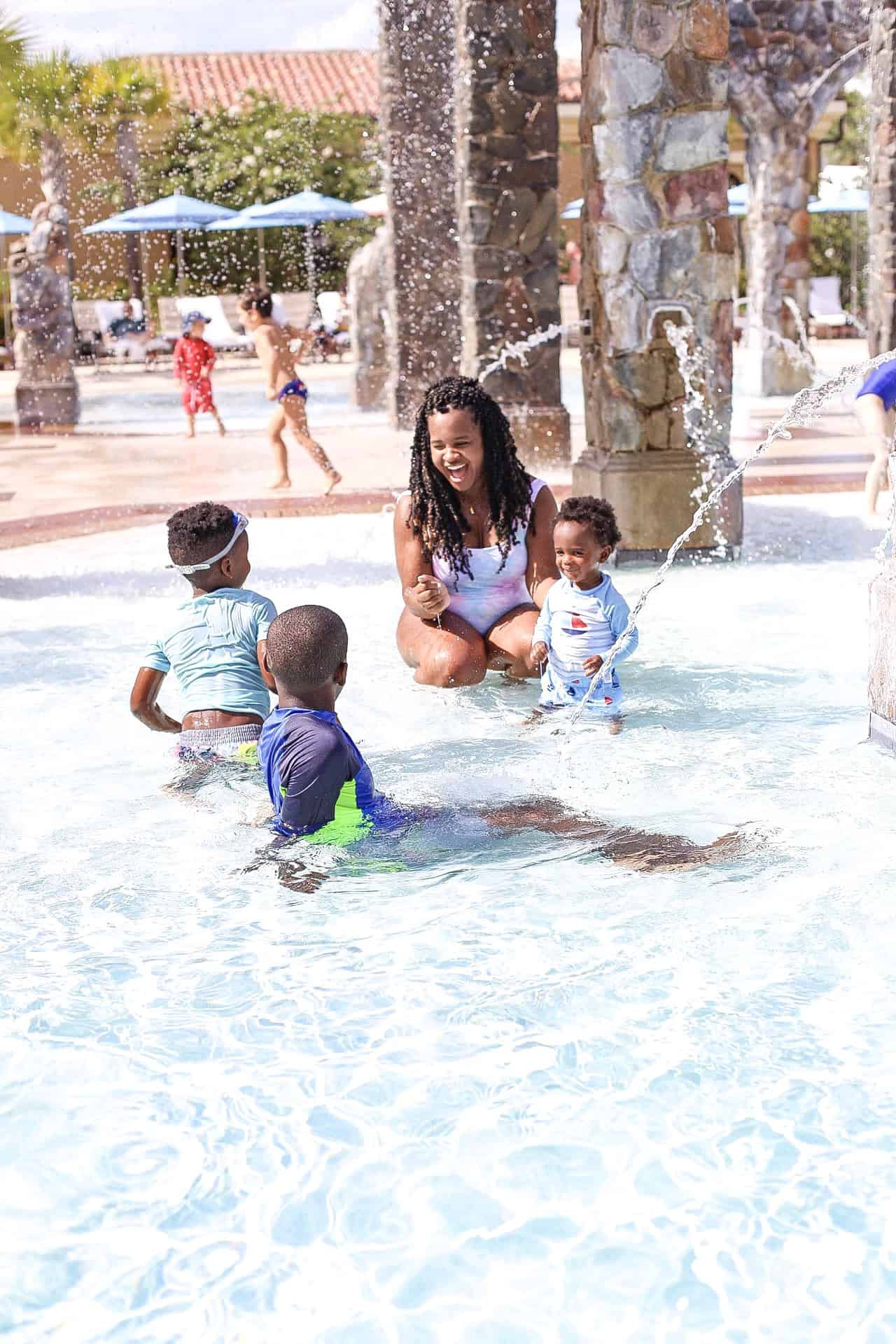 Rick’s favorite was the adult pool for obvious reasons.  Cyrus LOVED the splash pad. It is perfect for little children.  I think the highest the water goes there is 1’6”. We just had to watch him because Cyrus was getting a little too confident and trying to jump in the water. Naturally the boys loved the water slides and were racing while Cyrus was in the splash pad.  I personally loved the Four Seasons family pool. It is huge and has so many places to sit, and loved that on one of the nights we were there they had a dive-in movie playing! I sat in my lounger as the boys played in the water while watching Inside Out! 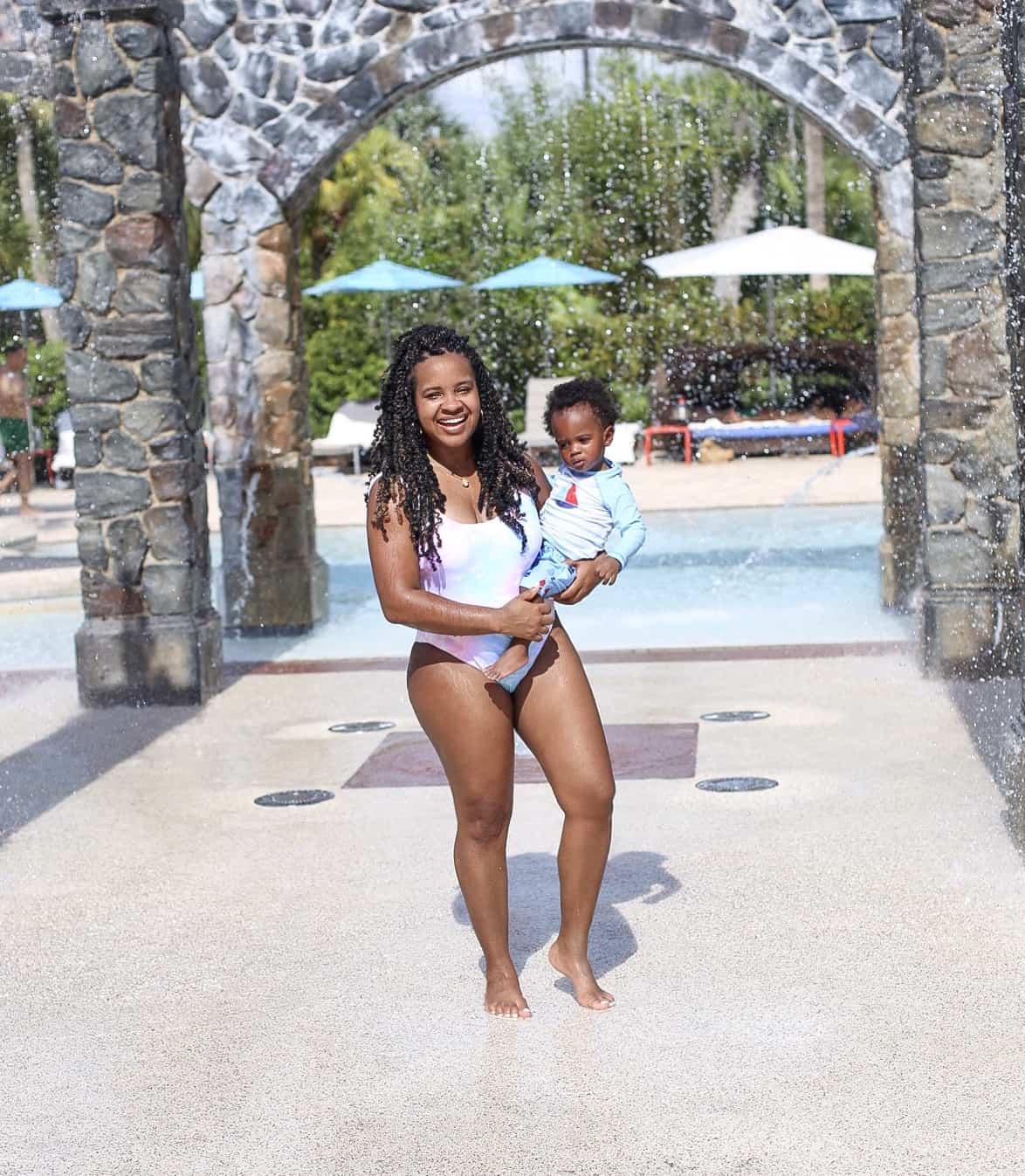 I know I have already talked about the Four Seasons Orlando level of service, but the pool staff was just so great.  The pool attendant followed us while choosing a spot to set up our area, and the server was constantly making sure we had all the food/drinks needed while at the pool. 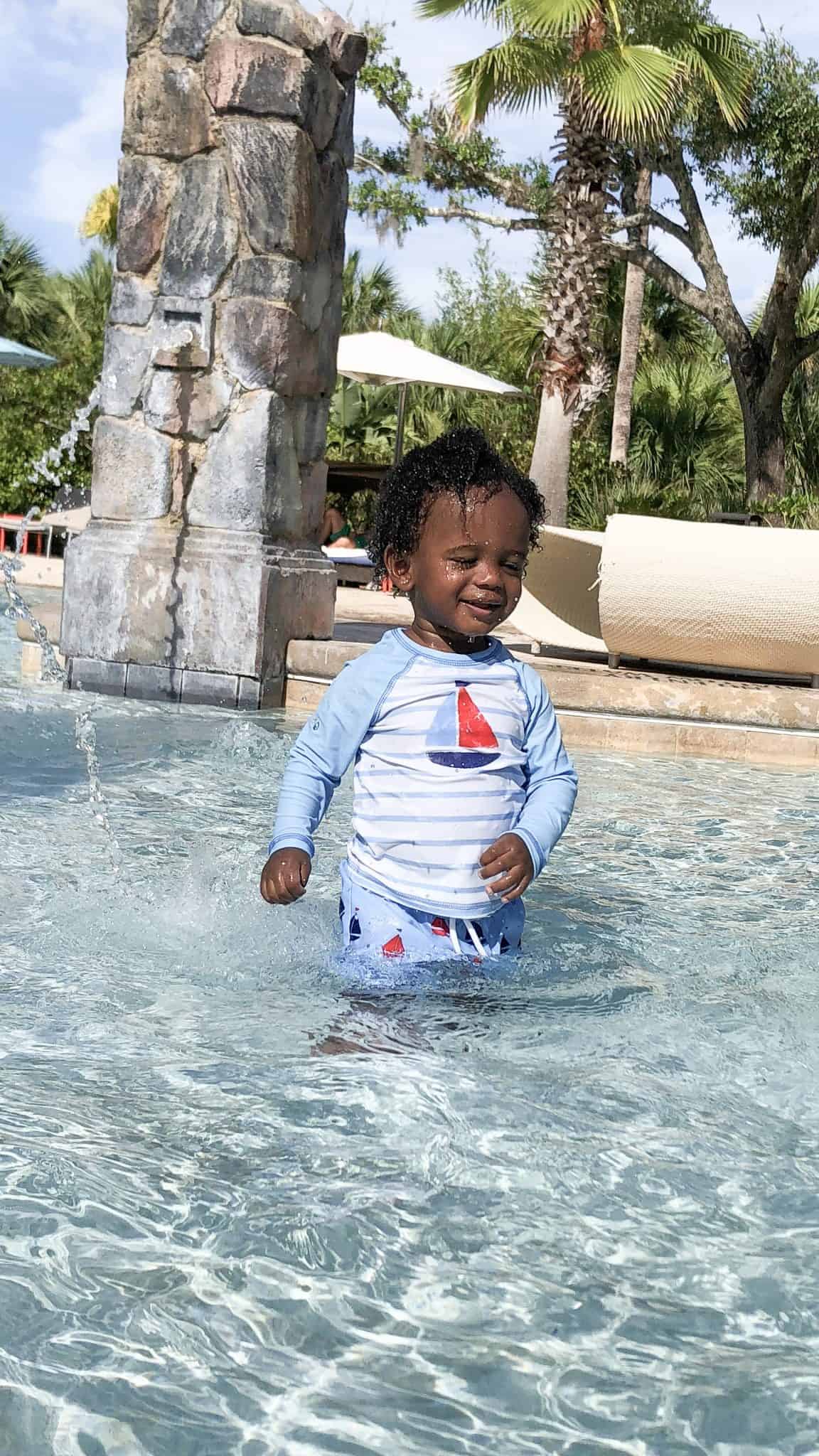 One of the things I loved most about this resort was I felt like I wasn’t really in Orlando, and definitely not right by amusement parks.  It felt like I was on this tropical island. The grounds were breathtaking. Every day we would bring Cyrus to the grounds and just let him burn energy and run wild. 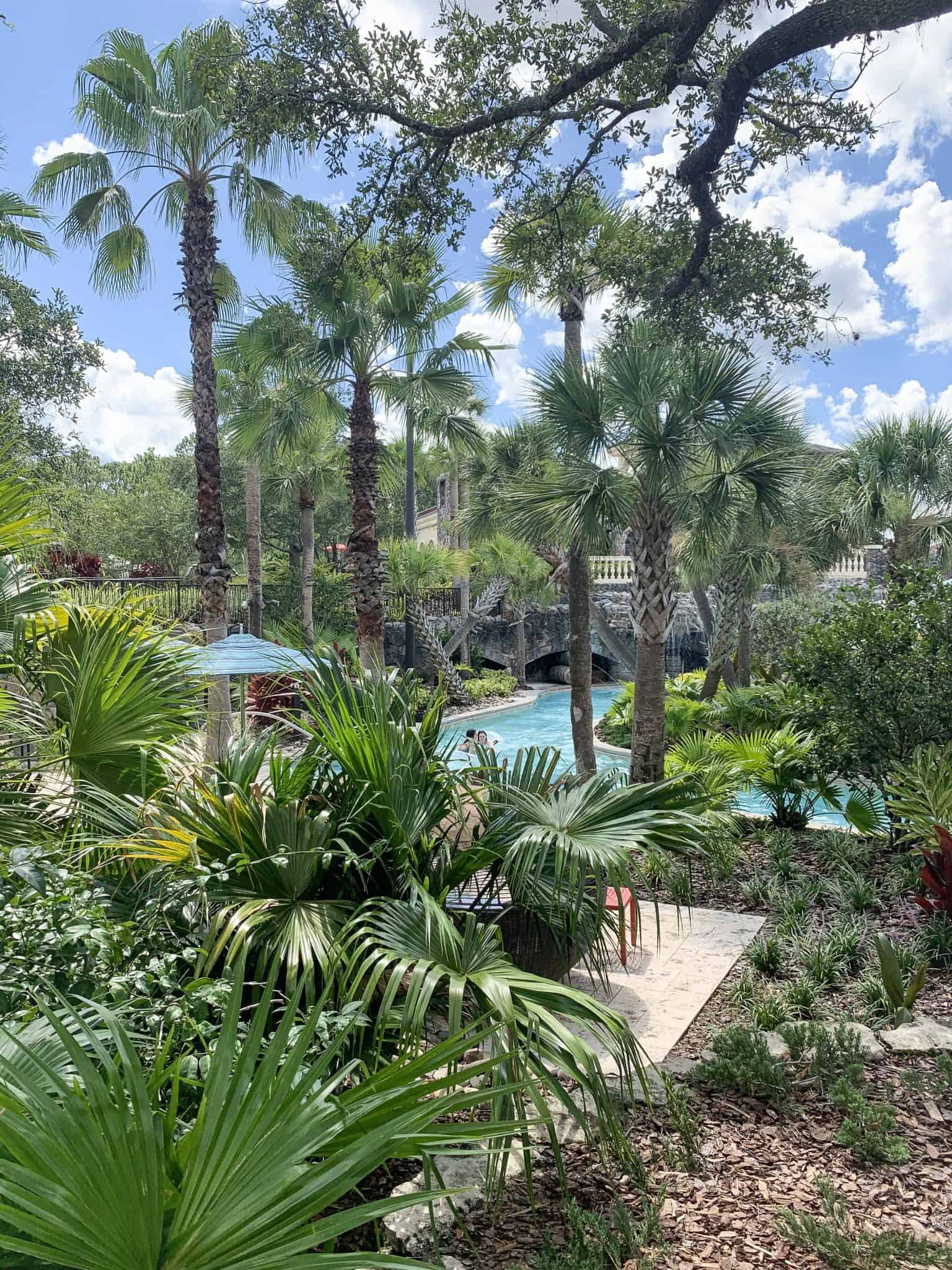 One thing that helped us explore the Four Seasons Orlando grounds was being provided the boys with a Pirate scavenger hunt.  The boys had to go around the resort and follow the clues. This ended up being a great way for us to explore the grounds as well as give the boys a fun experience. Of course the boys were happy once they completed the scavenger hunt they were awarded ice cream from Lickety Split.

Dining at the Four Seasons Orlando

Let’s just say I have never eaten at a Four Seasons resort and didn’t love a meal I had.  I often joke with my husband because after eating at the Four Seasons it has elevated his meal standards.  Rick jokes and says if it isn’t Four Seasons I don’t want it! HAHA! But really, every dining experience was amazing.

The first night we dined at Capa which was amazing they offered Tapas and a wide array of steakhouse options.  The boys loved that we were able to go out on the balcony and see the Magic Kingdom fireworks! This restaurant gives you that intimate flare but also very accommodating for families and all that they offer.  Cameron LOVED the macaroni!

This is a great casual restaurant that is great when you need to run in and grab some food.  We opted to sit out on the balcony which was refreshing! Also children under 5 eat for free here!

This is a restaurant in the golf clubhouse.  It was nice because a staff member shuttled us over via golf cart.  We ate outside off the water. Rick loved the Cuban flare and said he highly recommends everyone to get the Cuban Sandwich! Oh and we enjoyed their bottomless Mimosa and Bloody Mary bar! Children under 5 eat for free.

This is an elevated Italian restaurant that for me was probably my favorite.  Our server was fantastic, even with my special instructions! Most importantly he made it a point to always interact with the boys! You definitely have to try the meatball appetizers.  They were amazing!

There is also a poolside restaurant that time didn’t allow us to experience, but is definitely on my list for next time, because it looked amazing.

I will say again, I was unsure of how the boys would feel about going to a resort that was not a themed resort honestly.  And it’s almost laughable that I ever doubted the Four Seasons Orlando resort. The boys had so much fun! They were chatting with the staff and enjoying all the amenities.  One of their favorite amenities was hanging out in the Kids Club! We came to get them to see if they wanted to join us at the pool, and Calvin was almost in tears asking to stay there.  They came home with crafts from the club, and so many memories. They had an absolute blast! 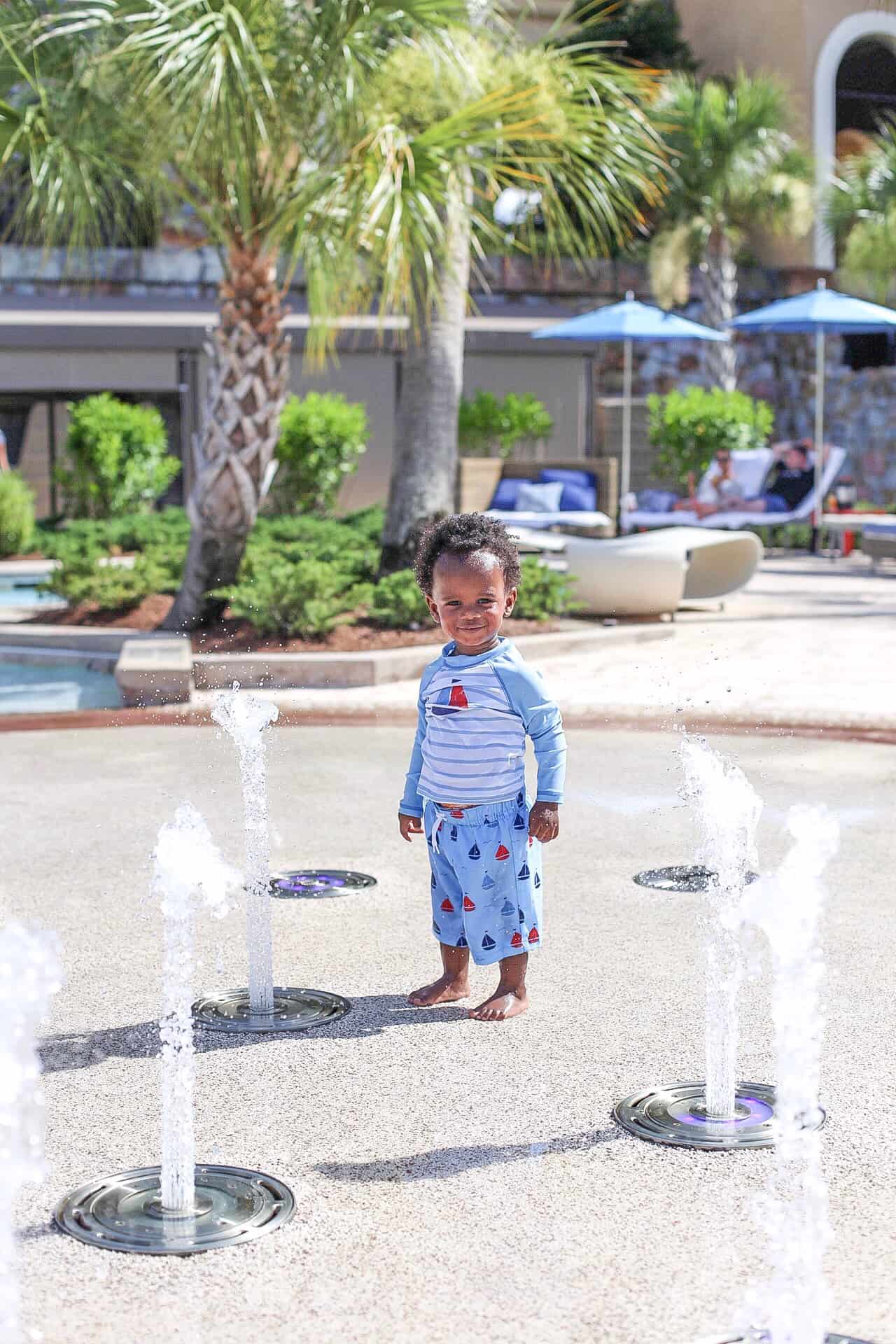 If you are planning a trip to Orlando I would highly recommend the Four Seasons.  It was breathtaking and everything our family needed. It allowed us to have that Disney experience but also paradise at the same time.

Oh… I cannot forget to tell you this.  Rick was adamant of having me include that the shower experience that is located in the spa is mandatory.  He said it is life changing! So you have to go there and try it! 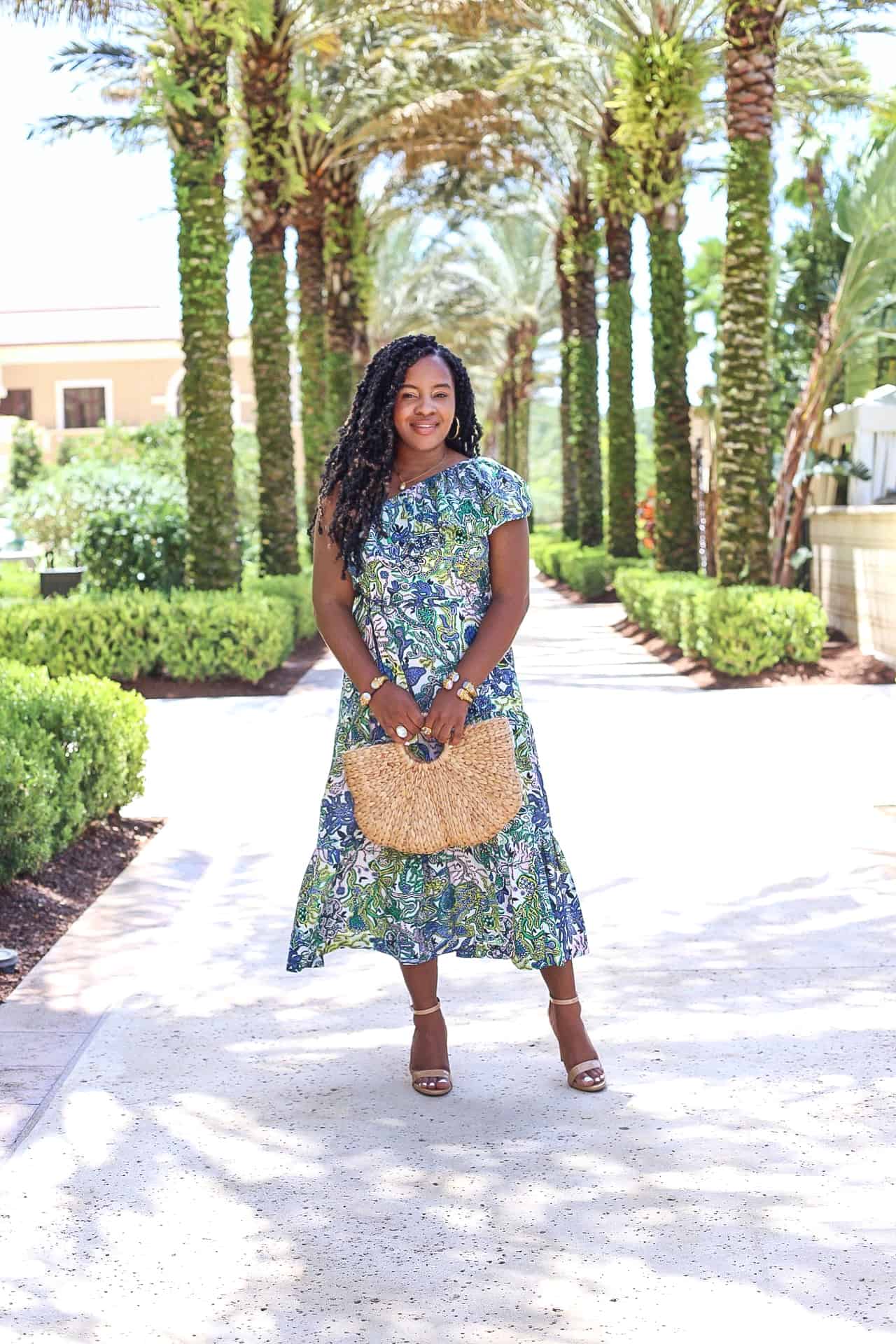 The Newton family is definitely prepared to make this a yearly trip for our family at the Four Seasons Orlando!